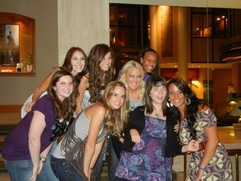 The Pageant of Hope has been Samantha's way of positively giving back to the world around her despite her injury.

Established by the former Miss Georgia Teen USA Jena Sims, who befriended Samantha at the America's National Teenager Pageant in 2004, The Pageant of Hope serves children and teens facing serious illnesses and challenges in an non-competitive environment. Each participant is made to feel like a prince or princess for a day by giving them their moment on stage and celebrating what makes them unique.

Just two years after her accident, Samantha helped bring the first ever Pageant of Hope to California and has been honored to be part of the 2011 pageant. Acting as one of twelve volunteer "Has-Been Beauty Queens" (also known as HBBQs) Samantha has rallied up participants by spreading the word about this uplifting event and gaining support from the local community.
Not only does this pageant allow Samantha to get back into the beauty queen circuit that she so highly valued prior to her accident, it also nurtures her giving spirit and perpetuates the positivity in her life!

To learn more about the Pageant of Hope, the non-profit HBBQs, Inc., Jena Sims, and the television show, "Everyday Health" that the 2011 pageant was featured on, visit: about.me/jenasims.

To Mom, With Love

In 2004, Samantha created To Mom, With Love, an organization devoted to giving children in shelters the ability to make gifts for their moms.

"I know the wonderful feeling that comes when I give my own mom a gift and can't imagine how it would be if I didn't have the means to do so" Samantha wrote in a letter describing the charity's purpose in 2004. "I want my organization to focus on the children and how they feel ....read more